The simplest way (to make sure that LEV systems continue to work properly) is probably to use an airflow indicator. This will give the operator a simple indication that the hood is working properly...The airflow indicator must indicate simply and clearly when the airflow is adequate.

Do You Need To Fit Air Flow Indicators To Your LEV Systems?

The HSE (Health and Safety Executive) recommend that LEV Airflow Indicators are fitted to all Local Exhaust Ventilation Systems (LEVs) to ensure that LEV systems continue to work properly and providing a clear indication when the airflow is adequate . air flow indicator hG258 guidelines

This is recommended specifically in the HSE’s HSG258 Guidelines (A Guide To Local Exhaust Ventilation LEVs), and indirectly in COSHH 2002 (Control of Substances Hazardous to Health) Regulation 9 which states that all LEV systems must be maintained in efficient working order.

Many people die or are disabled permanently because they breathe in airborne contaminants at their workplace. LEV is one of the devices that can help in controlling airborne contaminants at work. It is therefore a legal requirement for employers to make sure that Local Exhaust Ventilation (LEV) systems are working properly and LEV Airflow Indicators are an effective and efficient way of identifying this.

All do essentially the same job, but historically each meter or gauge only works in specific situations, at specific pressures – for example, 0-750Pa, 0-1,500Pa, and if the system changes the gauge no longer works – you would simply have to go and buy another. Analogue devices are also mechanical in nature, meaning they frequently fail, especially when subjected to vibrations, which LEV systems generate a lot of.

Our LEV Airflow Indicator also continuously monitors air flow, so as soon as a user starts to use an LEV system, they will see clearly and easily whether the LEV is safe to use or not. If air flow is insufficient, our LEV Airflow Indicator will clearly show a ‘cross’ sign on the display, and flash a red light to alert the user. It also gives the operator a simple indication that the hood is working properly.

With a battery life of at least 14 months, easily replace the 2 x AA batteries during routine inspection to guarantee continued tamper-proof operation and examination and testing.

How Does Our LEV Air Flow Indicator Work?

To fit our Air Flow Indicator it can be mounted directly onto the duct itself using the hand strapping and buckle supplied, or self-tapping screws or nuts and bolts as you prefer. Alternatively you can easily extend the tubing using the supplied adaptor and put the chevron up to 10 metres away, and it will work just as well!

Our LEV Airflow Indicator operates by monitoring the static pressure in the extract duct. The sample tube from the unit is fitted to the duct, close to the point of extract using an extended grommet or tapped hosetail.

Calibration takes under 10 seconds after the unit is installed using the provided magnetic actuator.

The unit samples the negative static pressure in the duct every 15 seconds, and updates the display accordingly.

Whilst the static pressure in the duct stays adequate for safe air removal, the unit shows this by displaying a continuously moving forward arrow.

If the negative static pressure within the duct drops by more than 20%, the unit recognises this as an unsafe condition. This triggers a series of flashes of the LED below the display, after which the display flashes a cross symbol.

When installing, our Air Flow indicator will be uniquely calibrated to the airflow of the LEV system they are being fitted to. It is important that the LEV system in question is working correctly to ensure correct calibration. Therefore, the best and safest time to install our LEV air flow indicator is soon after an LEV assessment has been conducted showing the LEV system is in full working order. learn more about us, hsg258 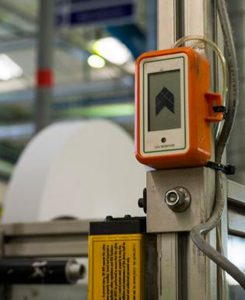 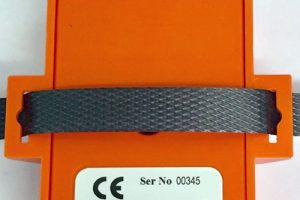 Next-Day Delivery
Available On Most Products