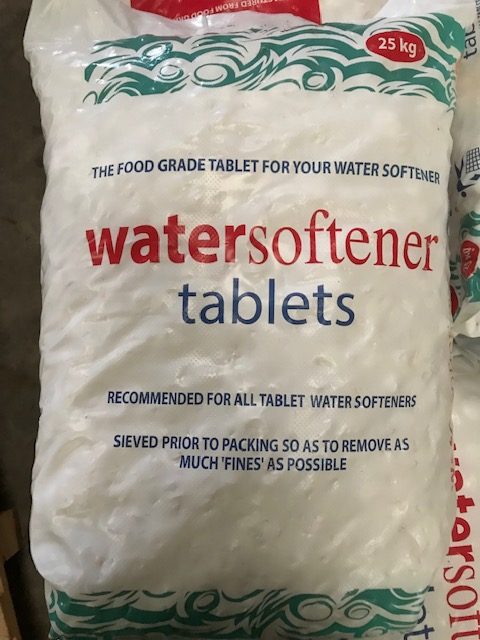 Why are our Water Softener Salt Tablets the best?

The price above is inclusive of delivery to your chosen address. Please note a forklift is required to lift the item when delivered to your premises.

Water softener salt tablets (25kg or 10kg bags of tablet salt in this case) work via a process known as ‘ion exchange’. Resin beads within the water softeners help to create soft water from hard water. The hard water goes over the resin beads to help remove magnesium and calcium minerals.

These are flushed into the plumbing system, never to be seen again. The tablets then replace them with non-dangerous sodium ions, therefore completing the ion exchange.

At some stages in the process, the resin beads will need to recharge in order to carry on removing hard minerals. But after that, they are then ready to exchange the ions and soften the water (as the salt dissolves the minerals) all over again.

What is Hard Water?

Water softener salt tablets (25kg bags or 10kg bags in this case) help to break down hard water, but what exactly is it? Hard water is water that comprises of a high percentage of essential minerals, unlike soft water.

Rainfall is classed as soft water until it reaches the surface and soaks up and dissolves certain minerals. These minerals normally consist of (but are not limited to) magnesium, calcium and bicarbonates. Hard water is classed as better for drinking (and a healthier version) because of this.

For that reason, it may seem like a superior option, but there is a very good reason for softening water. Hard water makes performing everyday household tasks exceedingly difficult and increasingly more time consuming. The added mineral element causes it to have undesirable effects on basic jobs that should be fairly simple.

Dishes start gaining residue, clothes become dirtier and washed hair becomes more lifeless. And because of this, it is overall a lot less energy efficient.

No, we also supply next day delivery (on working days Mon-Fri) on Water Softener Salt in Granular Salt Form. All forms of the salt (including block salt) are consumed at the same rate, it all depends on personal preference.

Tablet salt is the most popular consumable product (compared to the other two formats), and is generally used by the majority of companies wanting to soften water. Block salt is the latest version to arrive onto the market and is a product line the HX Store is considering stocking in the future.

How can our Water Softener Salt Tablets be used?

All tablet salts have the same functionality when used in a softener, unlike some industries where different products have varying usability. They all improve the efficiency of a water system and have a positive impact on the environment.

The premium quality Water Softener Salt tablets (25kg bags or 10kg bags) can be used both domestically and commercially (even though use in residential properties would be rarer due to the large quantity).

In a domestic environment the salt tablets can cause several advantageous outcomes due to their properties:

How many Water Softener Salt Tablets does a System need?

There isn’t a specific number of tablets that need to be put in but the tank should be around HALF FULL with Water Softener Salt Tablets to facilitate its purpose. If the percentage of ratio is significantly less or more than this then it won’t be working to its optimal level and the minerals will not be removed sufficiently.

It is a question on the mind of many potential purchasers when they are considering buying the salt. Buyers can often be concerned about overfilling or underfilling thier tank with it, and are worried about the effects it can have if that happens.

In general, two other main factors that should be considered are the hardness of the water and the water softener’s age. If the water has been producing large amounts of deposits and residue it may be running out of salt, the more tablets, and vice versa.

Over time a good rule to follow is that the water system needs monitoring constantly but specifically checking the tank once a month and reviewing the salt level is the correct way to do things to ensure purity. If a salt bridge has formed, then the area may be too high in humidity. Or it could be the salt that’s been added is that of low quality.

You've just added this product to the basket:
X